What our customers say..

These are comments our customers have sent us after we've carried out work for them. We believe it's vitally important to keep our feedback 100% genuine. Therefore while all feedback is very gratefully received it is never paid for through offers of discounts on future work

Please click HERE to see our reviews on google 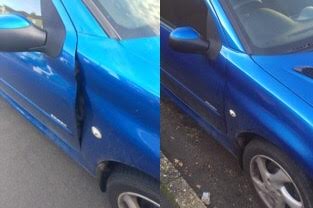 "I would recommend this company after i had a coming together with a garage door on my roof, my Mondeo ST220 is my pride and joy and when this incident happened i took it along to Fords who i thought would be able to fix my car to as good as new. Wrong, they wanted to cut the roof OFF and at a cost in excess of £2000. I was given Dentex's name and went straight round to see if they could help. After a consultation with the owner the car was booked in. Well when i picked it up i was Very pleased with the result so much so i had to write this. The roof panel is perfect no dents or marks, and at a cost of only £300, what a saving and i think a better job and in a fraction of the time. Thanks for a good job boys, and if i ever need any more work i would not hesitate to go back".

"If you would like any one to see your workmanship please contact me and if i am available they are more than welcome to come and look at the car".

Mr Hornby, Porsche 911
"I am writing to thank you for the excellent repair which you carried out to the wing of my Porsche 911. The damage, which extended to the diameter of a cricket ball, has been so expertly repaired that even in the brightest of light there remains no trace. The fact that you only required the car for half a day was a significant bonus, and the cost was a fraction of a conventional repair. Once again, many thanks; I would unreservedly recommend your service to anyone who finds themselves in a similar unfortunate position."
Peter Hornby,
Farnham, Surrey.

"Just a quick email to say thank you for the perfect job you did on my Hilux today .I am amazed with the results, you certainly know your stuff .I will recommend you to any of my  mates that need your services."

My Honda is not 18 months old so I was very upset to find one large and 4 smaller dents in my bonnet. Being black, it showed up every mark. I was quoted £270 for a local garage to fill and repaint and that would take 2 days

The Dentex engineer was here just over an hour, and I can honestly say there is no evidence of any of the dents anywhere. I am delighted. I work in Car Insurance and will be recommending you to my clients.

Thanks you so much

I can't recommend this company too highly. Totally professional and
hassle-free service. I had stupidly had an encounter with a gatepost while
backing into my son's drive, resulting in a sizeable dent on the front wing.
Some PDR companies I contacted told me the dent was not repairable, but
Dentex seemed confident they could fix it. And so it proved. Warren, the
technician, arrived on time, and over the course of an hour or so, calmly
and carefully removed all trace of the dent. As others have said, the
results are jaw-droppingly effective. And the charge was very reasonable, a
lot less than some of the quotes I received. If you're unlucky enough to
damage your car, don't hesiate to call Warren for an expert PDR service.

Just wanted to say a big thank you for your work today! A large dent fixed in an hour and half in the cold and no hassle as it's done at home. I had contacted another company also who told me I would have to go into the body shop! Would defo recommend you. Thanks again!!

Thanks again. Really impressed with the results and you have saved me a small fortune on unnecessary work and filler! Will bear you in mind for future work and recommend you

"Brilliant job done on my S-Max - including a nasty dent on a panel crease line. Can't recommend highly enough. Job done quickly and without fuss. I don't usually post feedback, but it is fully deserved in this case"

Wow!! I don't know how it's done but read on. DENTEX removed a nasty dent in the edge of the wing of my wife's Fiat 500 caused by a car reversing in a car park. The result, perfect. After about an hour the work was completed at my home without any fuss or bother and Warren who did the work was on time, polite and very knowledgeable. Very pleased, good price and would recommend without hesitation. Will use again if needed. I wouldn't go anywhere else.
Lynne Johnson. Nissan Qashqai
Hi i would just like to thank Warren for the fantastic job he has just done on the dent i had in my car You would never know it was even there. Great job, fantastic service flawless results, Warren can't thank you enough.
Richard Butcher – Portchester Hampshire

“ On Friday my Aston Martin met with a rather large bolt flying off the back of a Veolia Truck, on the M27 – lets say the impact created  a rather large groove into my bonnet, it chipped the windscreen and I have to say the noise and impact I thought the screen was going to break.  I was totally gutted  as I was going to a wedding that day. As soon as I got home I went on line and found Dentex –  and I made an on-line enquiry – which was responded on very quickly, a senior representative came to my home on the Saturday afternoon he totally fixed the dent and removed any sign of damage – I was most impressed by the total professional job. I would recommend this company and Warren in particular if you have a dent or door dink’s give these guys a call they totally made my day and cheered me up – I will be going after Veolia company to try and claim back for the damage - !!!

Derek Davis - Andover
Warren came to my place of work and within 15-20 minutes the job was done. You would never know a dent was on the door in the first place. Excellent high quality work and would thoroughly recommend Dentex to anyone. Del
Steve House - Andover
Can't thank you enough for the fantastic repair today. Amazing skills!
Have a great weekend. You have certainly brightened mine up :)
Cheers
Russ Whitear - Hook
The tailgate of my Range Rover Sport was recently dented accidentally by a hotel valet whilst opening it in a restricted height car park. After being quoted £810 by a local bodyshop to repair it (And a small dent on the front wheel arch that was there when I bought the car), I went online for a cheaper alternative. Luckily, I came across Dentex paintless dent removal who not only repaired both dents perfectly (As can be seen in the before/after pictures attached), but were a fraction of the cost of the respray quote. Highly recommended.
Regards
Russ Whitear.
Mr Bulpett - Chandlers Ford
Hi Warren,
many thanks for fixing the Kia, what an amazing job.
It was nice to meet a true Craftsman!
I will have no hesitation in recommending you to friends and family.
It was a pleasure to have met you.
Kind regards,
Dave & Tracy Bulpett
Neil - German Car Sales
As always, a great job, and i can highly recommend your services having used you a number of times of the last few years - swift, efficient and cost effective !! Thanks Neil
Mal Burgess - Basingstoke
Hello Warren, Thanks for the excellent work today removing the dents in my door. My car was only 5 weeks old when I slipped and dropped my motorbike trying to squeeze past it resulting in two dents. The paintwork was not damaged so having trawled the internet a PDR seemed the best option. I had one PDR company come out to look at it and they old me both dents were impossible to remove using this method as there was no access without stripping the door trim completely and even then no guarantees.
After reviewing your website and your bold statements about removing dents others could not, I thought I'd give you a try. True to your word you managed both. I particularly admired your determination to remove the one behind the door handle. The result- a repair totally restoring the car to pre damaged condition and one happy customer. I will have no hesitation in using you again ( hopefully not on this car!!) and in recommending you to others.
Thanks again,   Mal
John Millns - Mottisfont
Many thanks, terrific job.  Frankly, I really didn't expect you to be able to do such a good job, particularly as this was a £1100 repair (two quotes) via normal repair methods, which included a new door! I now have to look very carefully to be able to see any sign of even slight damage.
Rebecca Phillips - Alresford
Great service! I was sceptical that the dent in my car would be removable without a trip to the body shop but after sending pictures to Warren he said he could fix it and fix it he did - there’s no sign of the dent at all. All done at my home in about an hour. Thanks Warren.
Zoe Clarke Southampton
I just wanted to say thanks for the fantastic job that Warren did today on my car. It looks like new again. I got a quick response to my email. Prompt and courteous treatment. Such a relief to have it back to rights at a reasonable cost. I am already recommending your work. Kind regards
© Copyright 2019 Dentex Paintless Dent Removal

Your E-mail has been sent. We will be in contact with you soon.

Warning - Problem with your code

The security code you entered is incorrect. Please try again.

SORRY
Your content caused an error and your email has not been sent.
Please remove any unusual characters and try again